I think I haven't been this excited about Christmas in a really long time! Though its been really rough for our family, the one thing I have been looking forward to for a while is Layla's very first Christmas show! Especially because my husband was asked to be Santa! Now I know what you think, how would I explain to Layla that her Dad is Santa! Well I really didn't think of that, I just figured that she would not recognize him! I know what was I thinking?!!!!

Well the day of the show, I got really nervous what if she recognized him and ruin it for all of the other kids! Or what if she saw that it was him and then just not believe in Santa! We got our story straight just in case she recognized him, we came up with the grand story that daddy was a helper for Santa and that Santa needed him to dress up like Santa because Santa couldn't make it! (I know it's lame but hey she is three, we hoped she would believe it!!!)


So the plan was that the kids would sing three songs and when they sang "Santa Clause is coming to town" my husband aka Santa would come out and give gifts to Layla's class and then make his way to all the other class rooms! Everyone came out to see Layla in her first Christmas show, my father and titi Leslie were all in attendance! We had our video cameras, digital cameras and cellphones ready for Layla and Daddy's big debut!!! For Layla's part she did great! She sang her little heart out and it was so much fun to see her with her friends at school! I am telling you kids act so different when they are in school. Then the moment of truth came in the final versus of Santa Clause is coming to town, Layla's teacher urging them to sing louder so Santa could hear them and then BAM!!!!
Santa comes into the classroom! and BAM! LAYLA FREEZES!!!!

She froze completely froze!!! Just like how she did when we went to Disney and spent almost an hour online waiting to take a picture with Buzz and Woody! That was the only thing that didn't cross my mind! I was so worried that she would recognize him that I didn't bother to think what if she is afraid of him! I mean why would I think she would be afraid of Santa! Well she was! She was terrified!!! She wanted nothing to do with Santa and to top it off the tears came and when I tried to take her to him she did the limp thing where they go completely limp and just drop to the floor!!! I mean a few minutes ago she was the picture of perfection, singing and dancing and now she was limp and on the floor crying that she didn't want Santa! 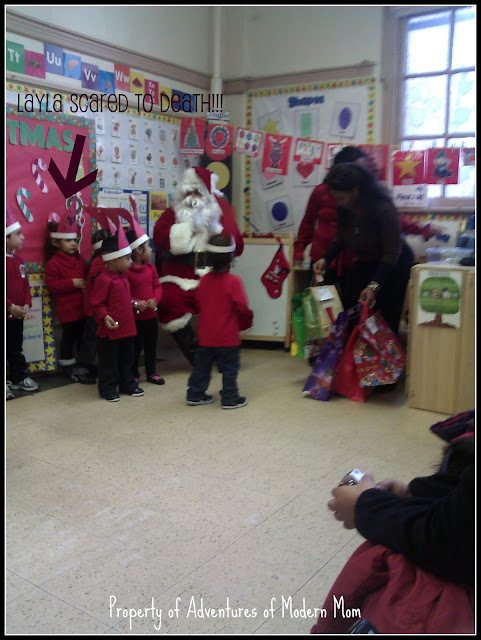 As you can see from the picture above she was glued to the wall and just would not move! Well I tried tell her hey Layla it's just Daddy but I guess that just confused her ( I know bad mommy) but all I wanted to do was make her understand she didn't need to be scared! At the end of the day all I had was a confused three year old! She didn't understand what was going on! All she knew was that Santa was a bit scary to her and that at one point Daddy was at her show and then he was gone and this Santa appeared! I mean by Christmas she believed in Santa again but for a minute she was confused. She told her dad she knew it was him! But that she was scared! Who knows what she believed or didn't believe! We tried to keep the Christmas spirit alive and I still think she believes in Santa and Christmas! I just think she is a bit confused about Santa being her dad! So the next time they ask him to play Santa I think my husband will take a pass!

Here are a few pics of her show before the confusion set in!!! I have to admit it was very fun and a bit emotional to see my little girl in her first Christmas show! And of course it was very funny to see her confused about Santa! 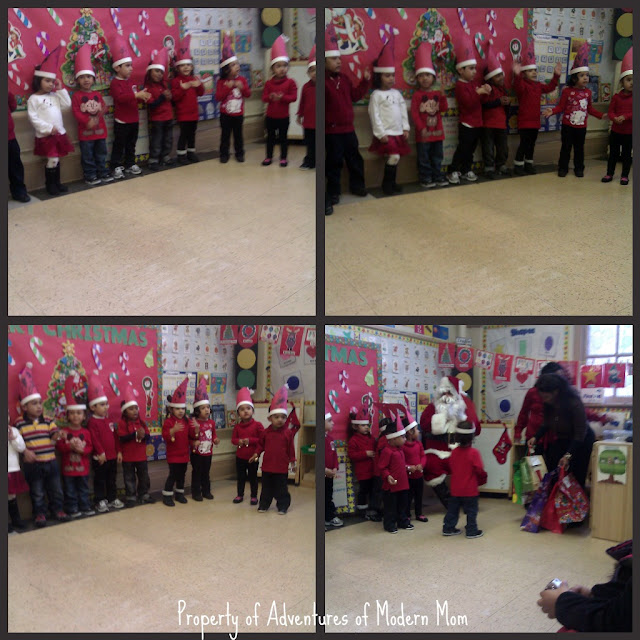 Email ThisBlogThis!Share to TwitterShare to FacebookShare to Pinterest
Labels: My Lil Ladies