GUEST BLOG SERIES: AUTISMWONDERLAND "TO FLAP OR NOT TO FLAP

I am so excited to have Lisa from AUTISM WONDERLAND  on as our guest blogger today! I hope you guys enjoy her as much as I do!

To Flap or Not to Flap

Months before Norrin was diagnosed, long before autism was even a thought in my mind - I would watch Norrin standing in his play-pen or exersaucer as he jumped up and down flapping his arms and hands. I encouraged it and often laughed with amusement, thinking it was the cutest thing ever. I thought he was imitating the "Little Einsteins" conducting music or Zee the owl (Moose A. Moose's friend) flapping his wings.

But after Norrin's second birthday, when he wouldn't (or couldn't) point or wave or speak - I started to ask questions, do research and begin the evaluation process. And then I learned that the adorable hand-flapping was a self-stimulating behavior associated with autism and other developmental disabilities. Immediately I wanted him to stop. I remember trying to hold his arms down whenever he flapped, feeling his little body tense up as I told him "no" or "be still." The stimming became priority number one, and I wanted every therapist that walked into our home to work on eliminating that behavior. Our ABA therapist, said she would do her best but that the stimming was often the hardest thing for kids on the spectrum to overcome.

We spent the next year, trying to get Norrin to stop - the phrase "quiet hands" was constantly repeated. Whenever I took him to the park, he'd run around, get excited and start his flapping.

Last year we took a drive to the children's museum with the ABA therapist and her seven year old daughter, when the little girl saw Norrin flapping, she turned to her mother and asked "Why does he do that?" She's not the first child to question Norrin's behavior. Just last week, a little boy asked me "What's up with Norrin? Is he okay?" And there I stood, completely dumbfounded by a six year old boy's question.

There are various opinions regarding self stimulating behavior. Should it be eliminated? Redirected? Or ignored all together? (Even me and my husband disagree on the issue.) I'm at the point where I don't care if Norrin flaps - who is it hurting? I don't encourage it like I used to, but I don't try to make him stop when he does; unless of course, I need him to complete a task, only then do I redirect him. Truth be told, sometimes I join him. I sit next to him, put my hand in front of my eyes and wiggle my fingers or flap my arms or hands. I can understand why he does it, it is somewhat calming.

The way I see it - we all do something that doesn't make sense to anyone but yourself. Some people bite their nails or twirl their hair. Some people whistle or hum. My husband paces back and forth whenever he's on the phone. I say "huh," even if I've heard the question, and I like to arrange books in size order and I need my hangers to face all one way.

And my Norrin flaps his hands when he's excited. Why should I make him stop, just so that he may be socially accepted? Why should children or adults on the spectrum be conditioned to change to gain social acceptance? Why can't society adapt? 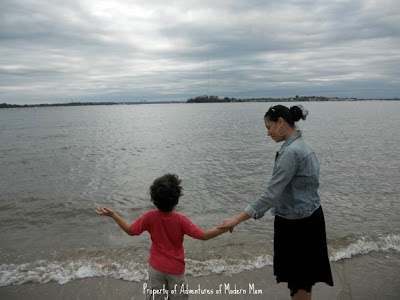 ~~~~~~
Originally posted on AutismWonderland.
http://www.autismwonderland.com/2010/09/norrin-eating-cupcake-cupcakes-are-flap.html
Posted by MODERN MOM at 10:36 AM