The Little things are a big deal!

Over at ﻿Autism Wonderland she began a "the little things are a big deal Monday's so I decided to join in and share my story... if you would like to learn more how you can join on the fun click here.

I know as parents you are not supposed to compare children. I mean isn't that one of the top rules!!! Well sometimes I can't help it. I sometimes use Layla as my barometer for how Ava is supposed to be doing. See Layla walked very early on before she was one and she spoke very early as well!!! She had a very big vocabulary and can communicate what she wanted and how she was feeling very well! 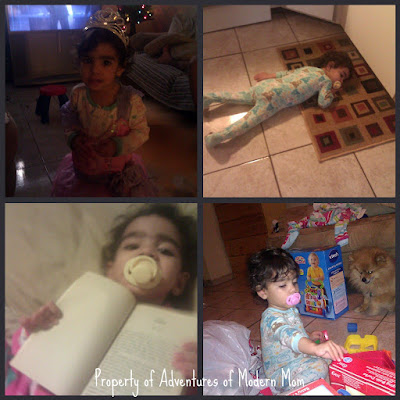 Ava on the other hand well she is still getting her feet wet when it comes to talking she is 20 months old and though I am not supposed to I always wonder is she behind or was Layla advanced! I know! I know! I am not supposed to compare but I do... especially because of Ava's history. See from very young Ava has always suffered from very bad ear infections, to many I have lost count! We have rushed with her to the ER and doctors offices at all hours of the day and night because she has a fever of 103 and then ear infections. Sometimes the left ear, sometimes the right and sometimes both!!!

Now as she was going through this I noticed that she really didn't pay us any mind! It would take me calling her over 10 times to get her attention! Most of the time I had to actually stand in front of her so that she can notice that I was calling for her! I read that children with ear/hearing problems sometimes are delayed in there developmental skills and in speaking because they can't hear you! I took her to specialist and he told me her ear drums worked fine! I brought up my concerns to her doctor who just told me it was too early to tell! But deep down I knew that her not really talking had to do with the back to back ear infections that she was having!

Her last ear infection was a big one! They gave her some antibiotics that we couldn't find anywhere, after three different pharmacies we had the meds, I guess those did it's job! When we took her to the doctor for her follow up not only was the ear infection gone but there was no liquid in her ear! See one  of the reasons she was having so many ear infections was that some liquid would not drain from the ear properly and thus make her more prone to get another infection!! "THE EAR IS CLEAR" I never heard such beautiful words in my entire life!!!!

It's been a few months since she has had an ear infection (knock on wood!) and in the past few weeks, her speech, her vocabulary has grown in leaps and bounds!!! This past new years eve we spent the day and night at my mothers house with family and friends as I was holding Ava I asked her "Ava you happy" and she said "I.. happy" Second most beautiful words I have ever heard! "I..happy" and the cool thing is that I can' tell she not just repeating she knows the feeling of happy!!! She is understanding me and I am understanding her! She is asking for things now by their name. She tells me when she has a pooping diaper!! There are still times when I still have to call her a few times to get her attention but I think that's more that she is ignoring me that she can't hear me!!!!

"I...happy" it's a little phrase, she didn't say it perfect but the thing is she said it! And that my friends are the little things that are a big deal!!!!

Email ThisBlogThis!Share to TwitterShare to FacebookShare to Pinterest
Labels: Motherhood, My Lil Ladies