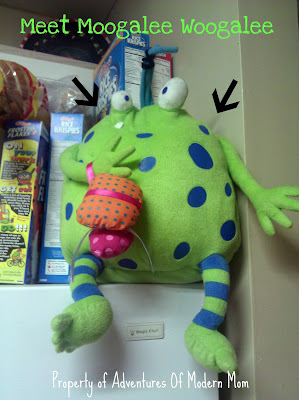 Meet Moogalee Woogalee Fernandez (pronounced just how it is spelled) He is actually a "Not So scary Monster" from FAO Schwartz. Don't ask me how he got his name, I just heard my husband and daughters calling him this and like just about every stuffed toy in this house gets a name, that one stuck! Little did I know when my daugther opened this stuffed toy up in Christmas that it would be a teaching tool for my daughter, and become a member of our family!

See when, she first opened up this stuffed toy, I think her exact words were, "Oh no, mommy this thing is ugly!" Now I really don't know who gave her this for Christmas but realizing that someone took the time to buy this and thought of them I immediately came back and told her "Oh no he is not ugly, he just looks different". She proceeded by telling me that he wasn't different but in fact ugly and told me that she was going to give it to her father!

Her father heard our exchange and when she went into the room, telling him that he can have this toy because it was just not up to her standards, my husband did something amazing! He jumped up and acted like if receiving this gift was the greatest thing ever! Layla was puzzled and asked her father why he was so happy? He told her that this was the coolest toy ever because he was not afraid to be himself! I wondered if she would understand that. She being 3, she responded by telling daddy he ugly he has spots and weird eyes. Her dad was like so... that just makes him different. Layla really didn't understand the term "different" used in that context. So for a while she continued to use the word ugly. But her father told her that it wasn't nice to call someone or something ugly and that just because someone or something looked different it was not ugly.

For a while "Moogalee Woogalee" really didn't get any attention, just when she wanted to play with her dad she would take Buzz light year and she would give Moo to her father. Now her father and I continued to tell her that Moo's spots and weird eyes where something he was born with just how her daddy and I needed glasses cause we can't really see and this caught her attention. Moo's traits were something that he couldn't help and if anything it helped him be who he was a "not so scary monster" Now I am happy to report that Moo has become the go to toy! He has won over my little girls!!!

This experience taught me that as parents we are the compass for what our children will tolerate and accept. If you don't show your children to show acceptance towards others they just won't. This all starts in the home! Now I know this may be self explanatory and just a little too much to learn from a toy! I always wondered how I would teach my children about acceptance and tolerance. I just figured that I would lead by example. I never knew that a toy would be the tool to open up discussions between us and our girls about accepting differences in others! So who ever got her "Moogalee Woogalee" thank you! We all love him and his weird eyes, his spots and stripes! He has become part of our family and Layla bestfriend! 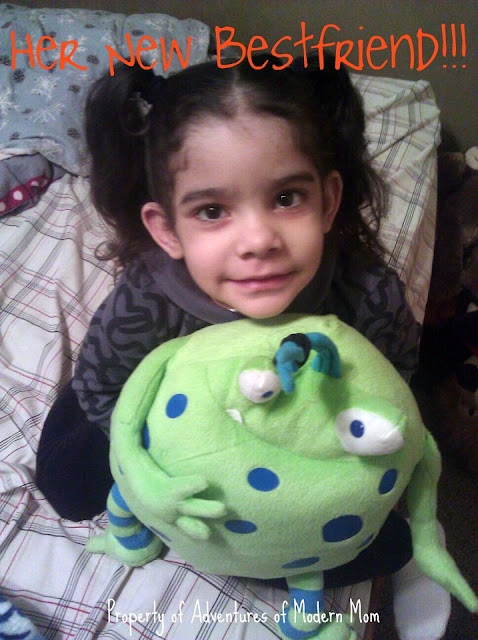 OK so one bad note... now Layla and Daddy fight over Moo... LOL! Just another day at the Fernandez house! Go figure!!!﻿
Posted by MODERN MOM at 2:42 PM

Email ThisBlogThis!Share to TwitterShare to FacebookShare to Pinterest
Labels: Motherhood, My Lil Ladies